Political scientists have been less concerned with what part public opinion should play in a democratic polity and have given more attention to establishing what part it does play in actuality. From the examination of numerous histories of policy formation, it is clear that no sweeping generalization can be made that will hold in all cases. The role of public opinion varies from issue to issue, just as public opinion asserts itself differently from one democracy to another. Perhaps the safest generalization that can be made is that public opinion does not influence the details of most government policies but it does set limits within which policy makers must operate. That is, public officials will usually seek to satisfy a widespread demand—or at least take it into account in their deliberations—and they will usually try to avoid decisions that they believe will be widely unpopular.

This dynamic is reinforced in Interest Groups and Lobbying, which illustrates how public opinion impacts the success of social movements and interest groups in making policy changes:

Movements also need opportunities to succeed. It is romantic to think that movements create their own opportunities through passionate protests, but protests more often capitalize and expand on already existing opportunities than create new ones. Usually such political opportunities arise when the interests of the aggrieved group may be convincingly portrayed as consistent with dominant social values. As noted earlier, the United States goes through cycles in which an emphasis on collective morality as the legitimate basis for lawmaking is displaced by economic individualism (McFarland 1991). Then, when the pendulum swings too far in that direction, interest in the collective good reasserts itself. If current policy treats a social group harshly during times of stability, it is presumed that they brought it on themselves, and nothing is done to help them. But when new values begin reshaping public policy, there may be an opportunity for marginalized interests to link their grievances to now important social values and gain public sympathy. Radical ideas start to have the ring of truth, and would-be leaders of the oppressed group see that an opportunity has arisen and the time is right to demand justice (Meyer 1993, 455; Tilly 1978).

The issues that members of Congress are concerned with, and how they should be resolved, are largely determined by the policy positions that please their “reelection constituency”, meaning the voters who voted for them in the past and hopefully will do so again (Fenno 1978). Lobbyists need legislators to influence policy in Congress, so lobbyists must persuade legislators that what group members want is more or less consistent with what their reelection constituencies want. 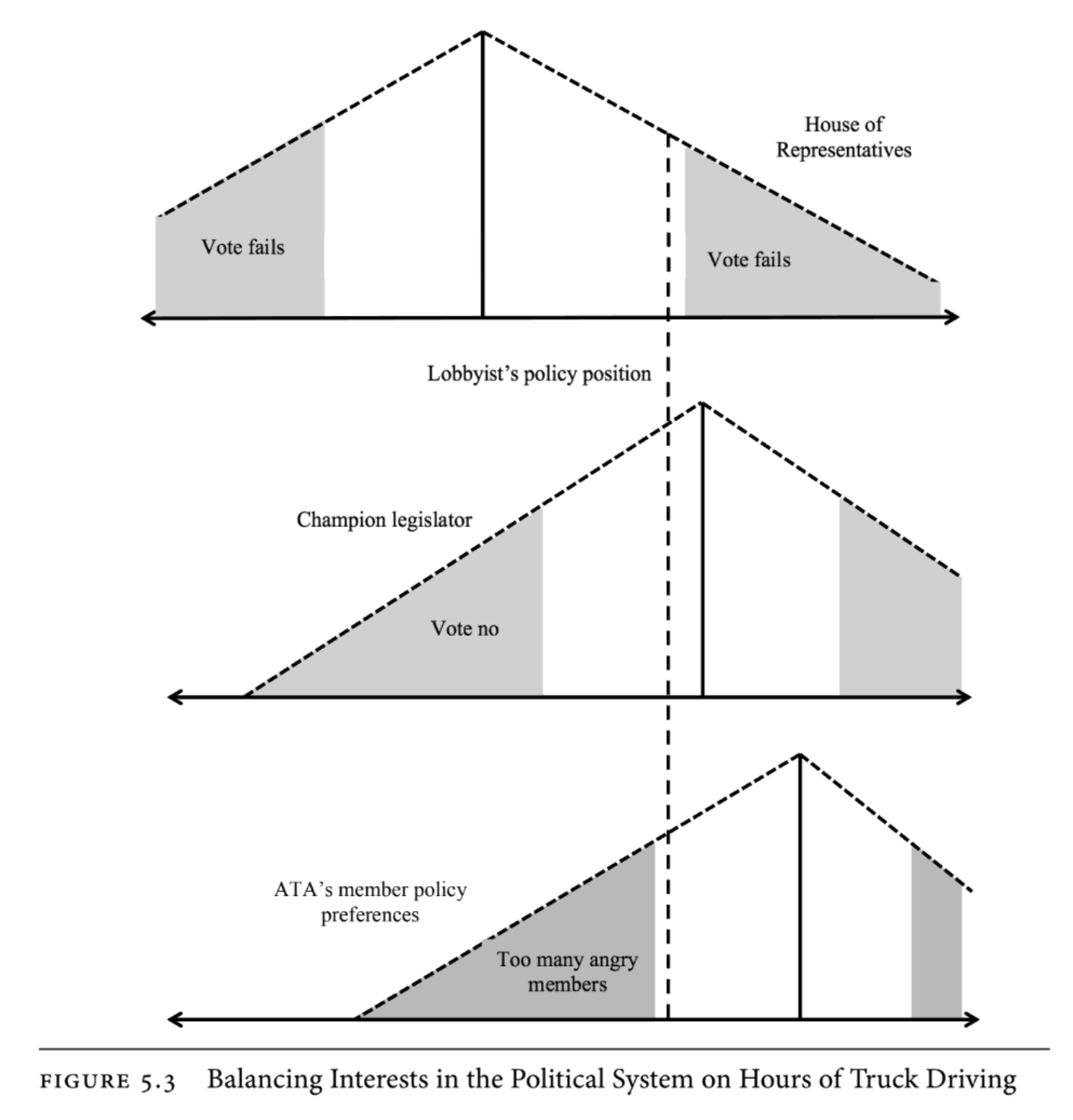 The vertical black line [in the “Champion legislator” section] shows that the legislator prefers a less restrictive policy when it comes to determining hours a trucker can drive. Perhaps the legislator is from a state where trucking is a major employer and he or she wants more industry support in the next election. Although the legislator is somewhat flexible about the ideal policy (is eight hours that different from seven and a half?), there are limits, shown by the tentlike dashed lines and gray areas in the … graph. He or she will not support a driving hours policy in the gray “vote no” zone. The white area around the legislator’s preferred policy, however, represents the other proposals he or she could be persuaded by the ATA to support in exchange for votes in the next election. Take the proposal represented by the dashed vertical line. It is not ideally supported by most ATA members, nor is it the legislator’s ideal solution, but it is close enough to the solid vertical lines for the legislator to support it and still expect to have the votes of a plurality, perhaps even a majority, of truckers.

So the ATA lobbyist can advocate for a compromise everyone can live with. The dashed line connecting group members to the legislator … represents this policy compromise on the driving hours issue. It is still … in the main bubble of group member preferences and also not in the legislator’s “vote no” zone. The legislator can comfortably support this policy, and many—perhaps most—group members will also support it. Almost everyone more or less gets what they want. The legislator will push for the policy in Congress, which means the lobbyist’s goal has been achieved, and his or her career remains in good shape.

What about the rest of Congress? One legislator may be all a lobbyist needs to get a policy proposal introduced in Congress, whether as a new bill or an amendment to an existing bill, but it does not get the job done. No one is an island when it comes to making policy, whether it is a new statute, a new judicial precedent, or a new administrative rule. Both houses of Congress need majorities to move policies out of committee and through the parent chamber, with sixty plus votes often needed in the Senate to overcome a filibuster. Presidential executive orders and agency rules can be overridden by legislative statute or sometimes influenced by Congress (McCubbins and Schwartz 1984; Balla 1998); federal judicial decisions may be overturned by statute; and statutes, rules, executive orders, and lower court decisions can all be struck down by the Supreme Court as unconstitutional. It is a lawmaking system with many parts, and no lobbyist dares to forget it.

This means moving beyond a simple alignment of group member interests with the interests of one lawmaker. To keep this simple I focus here on just the US House of Representatives. The House operates under straight majority rule, meaning a majority of representatives must be willing to vote for whatever policy is preferred by ATA members and the legislator … . Since the lobbyist and legislator want the new policy enacted, they must choose [a] position on the number of driving hours, one that they think can pass the House. Yet the lobbyist, and to some extent the reelection-minded legislator, must still keep an eye on what group members will accept, making the balancing act even more precarious.

In the bottom graph … , I [formulate] the distribution of ATA member preferences over the driving hours continuum so that the tentlike shape is a combination of all members’ ideal positions and intensity of their feelings. If members were more united in their preferences for policy outcomes, and/or felt more strongly about this issue, then more members would leave the group the further the lobbyist’s official position was from the solid vertical line—and the dashed tented lines would have steeper slopes. At the top … is a similar graph for the members of the House. Some care about trucking policy, while others couldn’t care less, but the white space under the peak indicates the policy positions that would garner a majority of votes in the House. The vertical solid black line marks the position that would attract the most votes.

The lobbyist and the champion legislator know where the House collectively stands on the driving hours issue and what positions can win a majority. The policy acceptable to the most legislators and group members is marked by the dashed line running through all three parts … . It is not what the champion legislator would ideally prefer, and it is not likely to gain anything more than a bare majority of votes in the House. It can just barely be sold by the lobbyist to enough ATA members to keep the group viable because it is fairly restrictive in the number of allowable driving hours. But for most group members and legislators it is better than nothing, and nothing would have been the result if the lobbyist had pushed a position that more ATA members would support, or one more ideally suited to the champion legislator’s goals. That was impossible, so the lobbyist skillfully balances all of the competing pressures he or she is under, satisfying the demands of all eight assumptions, to produce a policy that at least passes the House and pleases more trucking companies than it angers. Lobbying is not only the art of persuasion; it is the science of the possible, though there is an art to making the possible look desirable.

There are several points to take away from this model. First, it provides in-sight into the real job of lobbyists. Lobbyists are sellers: people whose job it is to convince others, such as their members and the lawmakers controlling the levers of power, that achieving a policy outcome is in their interests. Second, it shows that lobbying is about compromise. Lobbyists must convince all parties involved to accept an outcome that is less than ideal because their individual preferences are impossible to achieve given the current disposition of everyone else in the political system. Lobbyists have difficult jobs trying to balance these competing interests, finding the one position that enough people—group members, champion legislators, and other legislators—can all agree to and arriving at the best policy they can get. The lobbyist only needs to avoid picking a position that alienates too many of his or her members (the shaded region of the lower [graph]). Lobbyists may, however, use their control of information to convince members that the policy compromise getting enacted into law is actually better than what members originally wanted. And this simple model fails to include senators, the president, the bureaucracy, other interest groups, and possibly the courts. It is not easy being a successful lobbyist!

Lastly, the ATA lobbyist also targeted a legislator who more or less already agreed with the position many ATA members wanted. This is important to understand. A well-known study in 1963 about lobbying on American trade policy revealed for the first time something that cuts against popular perceptions of lobbyists: lobbyists tend to lobby their allies, those lawmakers already supporting them, not their enemies (Bauer, Pool, and Dexter 1963). This model shows why. To get their jobs done, lobbyists must lobby their friends, legislators whose positions are relatively close to those of many group members.