Advantage of the Status Quo

Status quo policies and incumbent politicians often have a systemic advantage in the political arena.

Some examples from Interest Groups and Lobbying:

In sum, when public interest groups are the challengers of the status quo, there is little evidence that they are getting anywhere at the Supreme Court. Of course when it comes to the consumer protection and environmental laws that these groups convinced Congress to enact in the 1960s and 70s, they are the ones defending the status quo, and they have the advantage. Basically the judiciary is a conservative institution in that judges and justices defer to the legislative and executive branches when they can, so challenging any policy status quo in the judiciary is an uphill battle. The payoff is enormous when successful, but it is a significant gamble of time and resources. … Petitioner groups win far more than respondent groups, but remember that in an appellate court it is likely that the petitioner group was originally the respondent and is actually defending the status quo! It is a common lesson in this book: status quo policies are hard to overthrow. 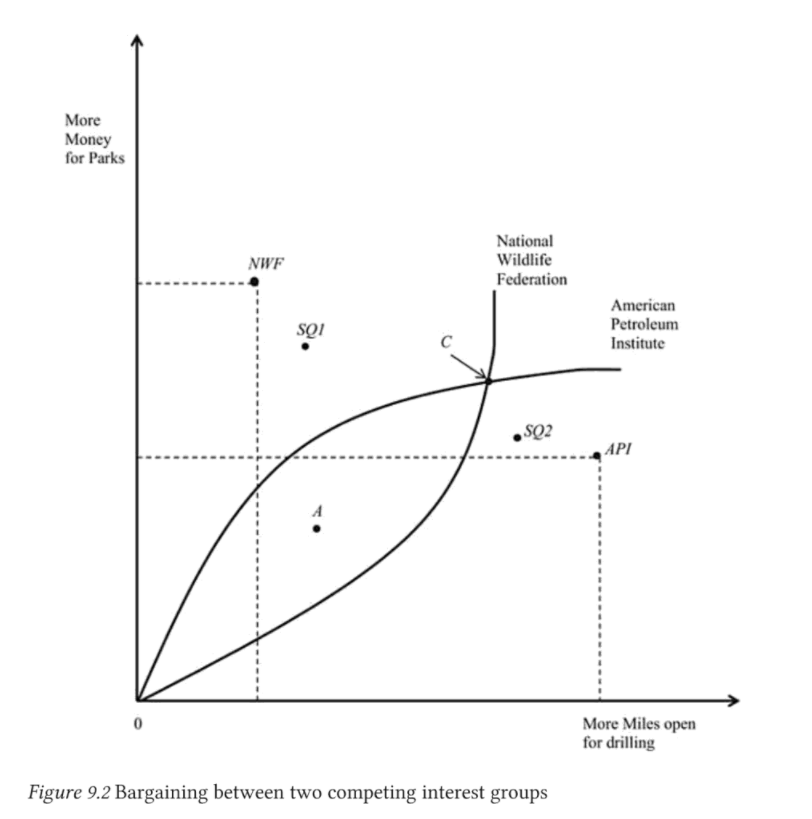 It becomes more complicated if a status quo policy already exists, and it usually does. Say point SQ1 in Figure 9.2 is the current policy and provides NWF with more money for less drilling than the API’s lobbyist would accept because it is higher on the vertical axis than the API’s curve. SQ1 is closer to NWF than it is to point C, so the NWF’s lobbyist will not bargain with the API because he or she knows the status quo is better than anything API will agree to. In other words, there can be no bargain in this scenario, and the NWF will fight to preserve the status quo. If the status quo was SQ2, then the NWF’s lobbyist would jump at the compromise at point C because it gives his or her members more of what they want than the status quo. But the API lobbyist would not support a deal at C because the status quo (SQ2) is closer to what his or her members ideally want. So bargaining and coalition building depend on what trade-offs members will tolerate and what the alternatives to not bargaining are, including the status quo.

In interest group negotiations like this, the status quo provides an advantage to whichever side it benefits most, since it bends the range of acceptable compromises towards the side of the status quo holder.

It takes money to raise money in politics. Raising money early is crucial to elected officials, especially challengers, though incumbents use early money to discourage potential challengers (Jacobson 1992). PAC leaders understand this, and some, like EMILY’s List, specifically contribute early to help favored candidates raise more money down the line (Box-Steffensmeier, Radcliffe, and Bartels 2005). Most PACs, though, are conservative about contributing early because they want to back winners. It is another reason why they favor incumbents (who nearly always win) and are often unwilling to take chances on challengers unless challengers show early on that they can win, usually through aggressive fundraising. For candidates challenging incumbents, this PAC mind-set makes raising money extremely difficult. More ideological, nonconnected PACs and super-PACs, however, are more likely to take risks on challengers who embrace their ideological positions. Non-ideological PACs, however, are only likely to give money early when a partisan wave is building that might change the balance of power, as happened in 1980 (Eismeier and Pollock 1986), 1994, and 2010.