I had a chance to test my reverse engineering skills in FireEye’s Flare-On challenge this year. While I didn’t get very far, I was still able to learn a ton and sharpen my skills for next year. All of the challenges are available on the Flare-On website, so feel free to follow along. With that said, let’s jump into the solutions!

Starting off, we’re given a challenge1.exe binary. Running the binary will prompt the user for a password:

Let’s take a closer look at the binary. Loading the challenge into Binary Ninja, we can quickly locate the strings used when comparing the passwords:

Looking at the cross-references to the “Enter password” string, we can jump to the password comparison function. Near the comparison itself, the string “x2dtJEOmyjacxDemx2eczT5cVS9fVUGvWTuZWjuexjRqy24rV29q” is pushed to the stack. 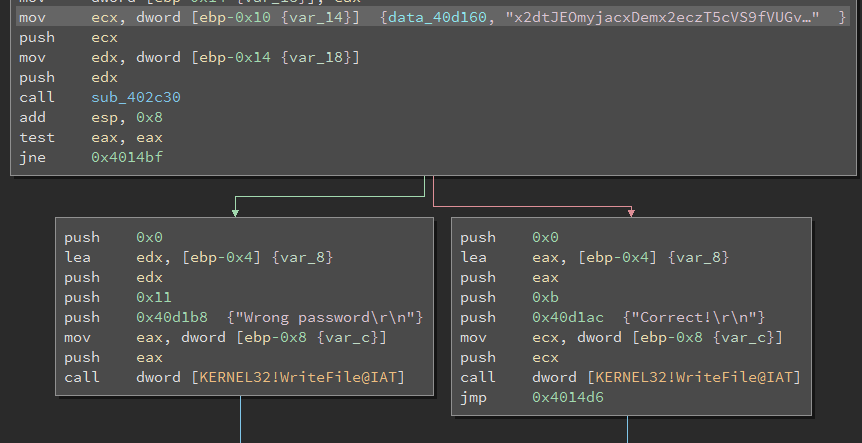 This looks fruitful! Let’s try entering this as the password:

Dang, no dice! Let’s use a debugger to see what’s actually being compared. By setting a breakpoint on the function called just before the comparison, then entering the password “test”, we see the string “aDSwaZ==” is passed to the function instead of our original input.

The double equals sign on the end of the string is a dead giveaway for a base64-encoded string. It looks like the program is base64-encoding our input, then comparing it to the comparison string (x2dtJEOmyjacxDemx2eczT5cVS9fVUGvWTuZWjuexjRqy24rV29q). If we base64-decode the comparision string, we’ll know the correct input to enter. Using a base64 decoder, let’s see what our comparison value decodes to: 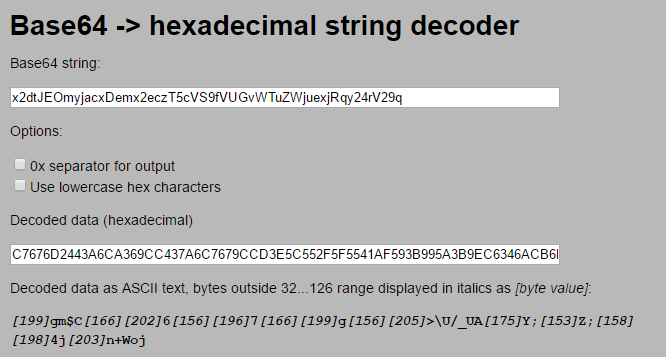 Huh, that doesn’t look right. There’s a lot of bytes outside the ASCII byte range. It looks like there’s something fishy going on here…

To understand what’s going on, I needed to do a bit of research about base64. I was looking at an example implementation of a base64 algorithm when I saw the following line of code:

This looks like an alphabet that’s designed to be easily changed. Curious, I scrolled up on the page and found the following information:

The particular set of 64 characters chosen to represent the 64 place-values for the base varies between implementations. The general strategy is to choose 64 characters that are both members of a subset common to most encodings, and also printable.

So it looks like this alphabet is changeable! Going back to the strings in the binary, we can quickly identify a 64-character value that looks like another alphabet:

A quick Google search reveals a tool that can perform base64 encodings with alternative alphabets for us. Entering the custom alphabet we just found and our comparison string returns “[email protected]” as output. This looks like our flag! Let’s give it a try:

The next challenge is aptly named DudeLocker.exe, with an included BusinessPapers.doc that appears to be encrypted. Upon inspecting the binary in Binja, we can see there are several initial checks that must be passed.

The first of which involves a call to SHGetFolderPath, which retrieves the paths of special system folders and returns 0 if the operation was successful. 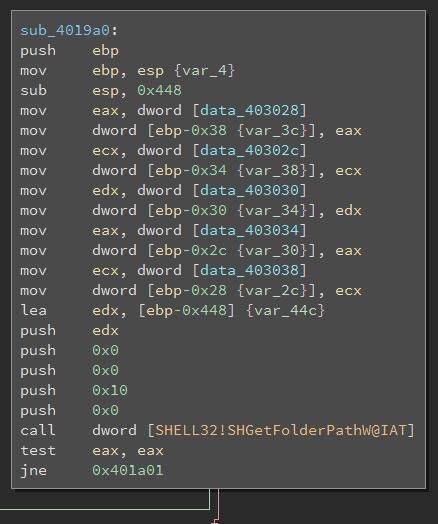 The 2nd parameter being passed to SHGetFolderPath (the 4th value pushed to the stack), 0x10, is a CSIDL value identifying the folder being retrieved. A quick lookup reveals CSIDL 0x10 corresponds to the user’s desktop directory. So, this function attempt will grab the path of the desktop, and the program will continue if the operation was successful.

The next block checks if the length of our retrieved desktop path is less than or equal to 0xf8, or 248 in decimal. If so, the program continues; otherwise, it returns.

Afterwards, we see a block with a call to CreateFile at the end. CreateFile, according to MSDN, “creates or opens a file or I/O device”. Despite its name, the I/O devices it works with are not limited to files; it also works with file streams, directories, physical disks, volumes, etc. The function takes the name of the I/O device as a parameter (the last value pushed to the stack), followed by 6 additional parameters describing the device’s attributes. 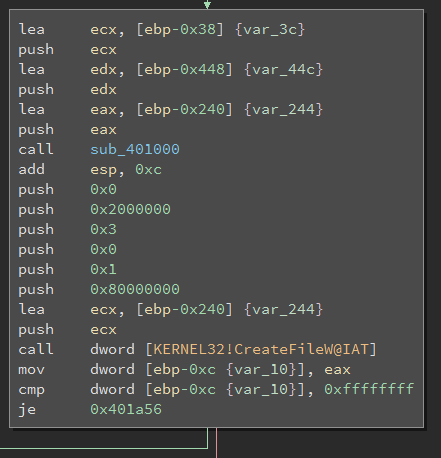 It looks like CreateFile is attempting to open an existing directory named Briefcase located on our desktop. If this operation fails, an error code of 0xffffffff is returned (INVALID_HANDLE_VALUE), which will print a taunting message and exit the program. Otherwise, we proceed onwards.

The next check lands us in a subroutine that calls GetVolumeInformation to retrieve the serial number of our root (C:) volume. This was deduced by tracing the parameters as we just did above, which is left as an exercise to the reader. The serial number is compared to the value 0x7dab1d35 (“The Dude Abides”) – if they aren’t equal, eax is cleared; otherwise, eax remains. 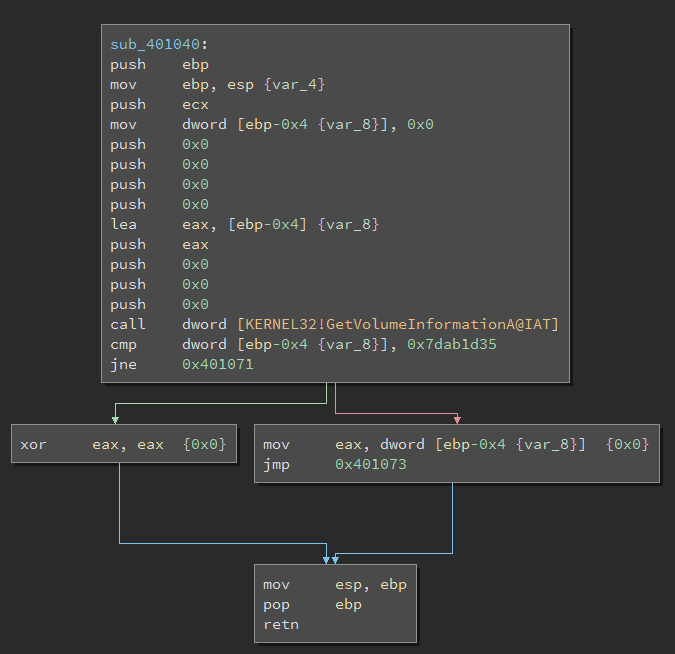 We need eax != 0 to pass this check, so we’ll have to either change our C volume’s serial number or bypass this check with a debugger. I opted to use the handy VolumeID from Sysinternals to change the volume’s serial. (Did I mention it’s important to work on these in a VM?)

Let’s try running the binary at this point. We’re greeted with a ransom note in the briefcase that rudely replaced my desktop background: 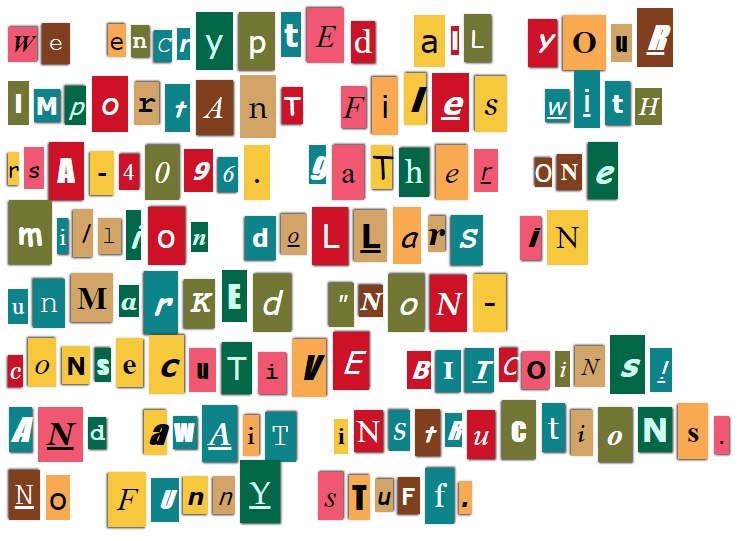 Looks like they want a million Bitcoins. Maybe those business papers will suffice? Let’s drop BusinessPapers.doc in the Briefcase aaaaand…

Dang, still encrypted. However, the Last Modified date on the file changed, so DudeLocker must have done something with it. Taking another look at the binary reveals calls to CryptEncrypt in the program’s Import Address Table:

This makes sense, since our modified BusinessPapers.doc still appears to be encrypted. However, the IAT doesn’t seem to have any entries for a decryption function. Taking a look at CryptEncrypt quickly points us to CryptDecrypt, which uses the same arguments sans dwBufLen at the end. If we could patch the call to CryptEncrypt with a call to CryptDecrypt, we might be able to decrypt the contents of the BusinessPapers!

Let’s take another look at the IAT. The entry for CryptEncrypt is 0x24fa, which refers to an offset in the DudeLocker binary. If we add that to the image base of 0x400000, we get 0x4024fa. Inspecting the binary at 0x04024fa reveals the following:

Hmm, looks like there’s another offset (0x00ba) followed by “CryptEncrypt” in ASCII. To make sense of what we’re looking at, I loaded the Windows DLL containing CryptEncrypt (advapi32.dll) in Dependency Walker and found the exported CryptEncrypt function:

Aha! It looks like 0x00ba was referring to the function’s hint, which contains the index for that function in the DLL’s export table. The hint for CryptDecrypt is 0x00b4. Are you thinking what I’m thinking??

Well, you are now. Patching the IAT allowed us to decrypt the file instead of encrypting it! The file still doesn’t look like a DOC file, but if we open it in a hex editor, we see the initial bytes FF D8 FF E0. A quick Google search reveals that’s the file signature for a JPEG image. Changing the file type from .doc to .jpg reveals our flag: 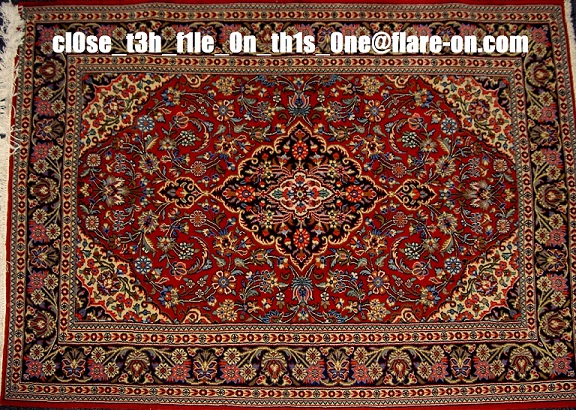